The roots of the Folkestone & Hythe Orchestral Society go back to the Folkestone Municipal Orchestra, which was established in the early 1920’s as a very proficient local professional orchestra.  We have only recently discovered that around 1932, the Folkestone Amateur Orchestral Society was originally formed (and conducted) by Mr Alfred Dixon.  This ran alongside the Hythe Orchestral Society and the two orchestras then merged in 1961, thus forming the Folkestone & Hythe Orchestral Society (FHOS) - hence we celebrated our Diamond Anniversary last year.  We have certainly developed a lot over the last 61 years into the orchestra that we have today.  The orchestra's archival records go back to 1961, which indicate that it gave its inaugural public concert under its newly formed name (FHOS) in the Radnor Park Congregational Church (the United Reformed Church), with just 20 players under the direction of Mr. Alan Hall and we can now boast a membership of almost 60 players!  We continued to perform concerts at the United Reformed Church until April 2016.  Holy Trinity Church, Folkestone with its magnificent acoustics, then became the regular venue for our concerts, although certain problems have recently arisen owing to space needed (due to Covid) and the lack of nearby parking, plus a leaking roof which has resulted in us having to find alternative venues for our concerts with no suitable venue option being available to us in the Folkestone & Hythe District.  We have also utilised the Saga Pavilion and the Leas Cliff Hall for concerts, as well as the Hawkinge Community Centre for our family Christmas concerts.

Whilst we now perform under the name of ‘Folkestone Symphony’, we still maintain and officially operate under Folkestone & Hythe Orchestral Society (FHOS) as our Registered Charity name.  The orchestra today relies on members' subscriptions, ticket sales and donations from our Friends & Patrons which barely enables us to put on up to five concerts each year.  We are therefore particularly keen to encourage more Friends & Patrons as our running costs continue to grow.  Our Vice-Presidents are persons to whom the orchestra wishes to express special thanks and appreciation.  Please either go to our Friends & Patrons page or contact our Chairman, Derek Kemp or phone 01303 894635.

We have around 60 active playing members of all age groups, who are highly motivated and enjoy making music together.  Our membership takes in a wide catchment area all over South East Kent. We are a friendly group of musicians who meet up weekly to rehearse for the concerts.  We owe much of our continuing success to our enthusiastic members and also to the skills of both our conductor, Rupert Bond and our leader, Floriane Peycelon, who all work hard to give three main concerts a year in November, March and July, usually to very appreciative audiences.  Rupert and Floriane are both very fine musicians who push the members to give their best to the music, but who make our rehearsals both constructive and enjoyable.  We may also manage to give a Family Christmas concert and/or a Summer Prom. 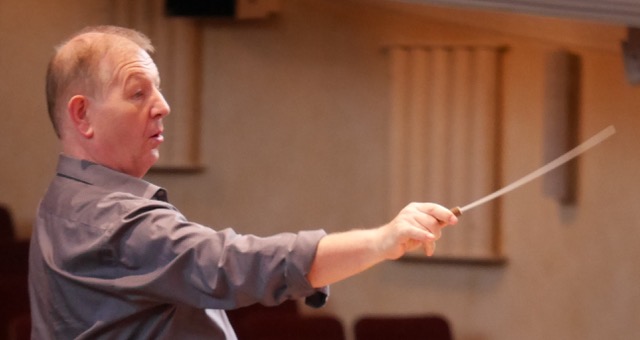 Rupert Bond gained his BMus at Goldsmiths' College, London University before studying Conducting and Double Bass at the Royal Academy of Music. In 2012 he gained an MMus in Composition at Surrey University.

For 16 years he was Director of Music at James Allen's Girls' School, London, a post that enabled him to continue to pursue his conducting career, founding the Docklands Sinfonietta in 1987. He has also continued to develop his skills as a composer and to date has written over 40 works.

In 1999 he was appointed an Associate of the Royal Academy of Music for services to music. In 2003 he has concentrated on full-time conducting, spending time in New Zealand and South West England, but since 2013 he has lived in Kent, working with many orchestras in the South East. He is thrilled to be the Musical Director of the Folkestone Symphony and is looking forward to creating many more exciting concerts with them. 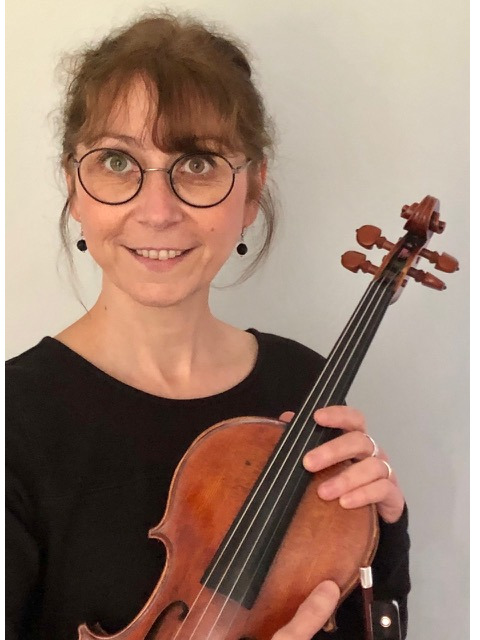 Floriane Peycelon is a very versatile musician, accomplished both as a busy freelance violinist and a very experienced teacher. She is the visiting Violin tutor at the University of Kent and also teaches privately. She has led the Folkestone Symphony since 2000.

She regularly free-lances as a function violinist and a freelance orchestral player, working with all the leading orchestras and chamber groups throughout the South East. She has given numerous solo and chamber music recitals in the UK and abroad. Her solo performances to date have included the Bach Double Violin concerto, the Mendelssohn Violin Concerto, the Beethoven Violin Concerto, Vaughan Williams’ Lark Ascending, and very recently both Winter and Summer from Vivaldi’s Seasons.

The orchestra would welcome any enquiries from prospective new members.  However, this is always provided that we have vacancies.   We ask for at least Grade 6 standard for strings and Grade 7 for woodwind and brass. We rehearse on Monday evenings from 7.30 – 9.30 pm. For further information please contact office@folkestonesymphony.org

Folkestone & Hythe Orchestral Society (FHOS) is our official name and is a registered charity. Trustees (Committee) are appointed or elected by the membership annually at the Annual General meeting.

This site uses cookies. By continuing to browse the site you are agreeing to our use of cookies.