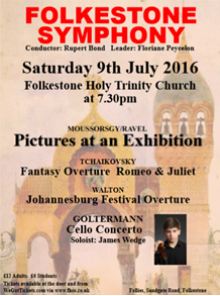 Mussorgsky/Ravel - Pictures at an Exhibition

Folkestone Symphony gave their summer concert on Saturday 9th July at Holy Trinity Church. It began with a wonderfully exuberant performance of Walton’s Johannesburg Festival Overture, written for the seventieth anniversary of the city. It was a propitious choice, for it characterised the whole concert - full of flair, great tunes executed with precision and balanced rhythmic diversity and orchestral contrasts. Particularly fine moments here came from the superb brass section and the unusually large percussion section, enhanced on this occasion by tom-toms, rumba sticks and all kinds of exotica to make this jazzy explosion of music an absolute pleasure.

The overture was not the only unusual piece in the concert, nor was it the only one with African connections. The second half began with a little known cello concerto, number four of eight by the mid-nineteenth century German, Georg Goltermann. It was in the programme as a tribute to the 18 year old principal cellist, James Wedge, - now leaving the orchestra after seven years of service – and how privileged we were to share in that moment. The piece turned out to be a delight in itself, full of expressive melody and joyous interaction between soloist and orchestra (the duet with the bassoon was particularly memorable) but it was not for the piece that the audience burst into applause at the end – it was for the unmissable talent of this young soloist. He accomplished amazing runs at great speed, his bow control brought every ounce of tone from the instrument and his intense but engaging rapport with the audience was stunning for one so young. Most moving of all was his commitment to the charity Alongside Africa, to which James had donated his soloist fees as well as devoting his time last summer to volunteering for this small local charity which gives its all to supporting - in fact saving - the lives of desperate and destitute children in a remote part of Uganda.

Before the interval, we had also enjoyed one of the great pieces of the orchestral repertoire – Mussorgsky’s Pictures at an Exposition in its brilliant orchestration by Ravel. It began life as a piano tribute to the composer’s artist friend who had died tragically and portrays an imagined walk through a gallery of a number of his pictures – many of them fascinatingly grotesque or evocative. This talented orchestra had no difficulty, marshalled superbly by their conductor, Rupert Bond, in exploiting all the colour and shades of this really rather difficult work. The highly versatile woodwind department were playing additional instruments to depict the widely different paintings – cor anglais, alto saxophone, piccolo and bass clarinet all creating marvellous moments. This composition, however, is not just about illustration, it is renowned for the brilliance of its ending –  with bells, cascading scales, wonderful tune and sheer volume combining in a tremendous climax. You might imagine that no amateur orchestra could do that justice… but here the audience were in raptures at the end, and deservedly so.

The finale to the concert was also Russian – Tchaikovsky’s Romeo and Juliet Fantasy-Overture, a fitting piece for the four hundredth anniversary of Shakespeare’s death and another challenge – the fight, the love scene and the haunting orthodox sounds of the chorale associated with Friar Lawrence all need careful and sensitive treatment as they are so well known. Much of the burden of creating the emotion falls on the strings, who were led with distinction and fervour by Flo Peycelon. The violins, only sixteen in number, had to compete with some of the most majestic wind playing I have heard for a long time (especially the excellent trumpets and the poignant horn descant) and yet their passionate expression of tragic love soared high into the vaults of this lovely church.

Rupert Bond brought meaning to the music not only through making each of these performances special, but also through his accord with the audience. When he spoke to us of his eagerness for all to share in the wonder of classical music, I can only hope that his wish is fulfilled with a huge audience at this orchestra’s next concerts – you will not find better.