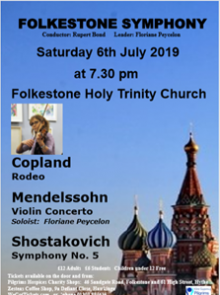 The steady growth in the size of the audience at recent Folkestone Symphony concerts is an indication of the good quality of what is on offer. Holy Trinity Church’s central nave was full and even the side aisles well-populated on 6 July for what turned out to be a rewarding musical event, and certainly the best value available in the area for the £12 ticket price.

We have long become accustomed to taking secure technical standards as a characteristic of a group of professional and serious amateur orchestral players under the conductor Rupert Bond, enabling listeners to enjoy the music on offer. From my seat half-way down the nave the balance between the various orchestral departments was excellent, with the strings holding their own in even in the most brass-drenched parts of the ambitious programme. The precision and vigour of the tympani and percussion were a particular pleasure. Throughout the evening, while the loud sections were exciting, the most memorable passages were the quiet ones, the players proving on several occasions how magical their pianissimo could be.

The first item – Dance Episodes from Copland’s Rodeo Suite - was delivered with far more rhythmic edge than we had the right to expect; comparisons with professional orchestras in this sort of repertory can be cruel, but Folkestone Symphony had little to fear. The Mendelssohn concerto was a delight. Floriane Peycelon’s violin carried easily above the orchestral accompaniment; she produced a sweet tone and impeccably accurate intonation. She engaged with the changing moods of the music, and the orchestra responded well. I noted at the time that Floriane’s playing, though elegant and stylish, was also exciting and at times mercurial. The Andante started at a pace which respected the composer’s instruction (often it is played too slowly) and the Allegro multo vivace had real fizz. She delivered a performance that justly earned its standing ovation – an artist living in our community is to be treasured.

Shostakovich’s Symphony No 5 is a tough assignment. Its first and fourth movements demand power and passion from all departments. There was no lack of commitment from the players, and the heavy brass proved to be splendid, though within a dynamic scale that was still musical – it never degenerated into mere noise. But for me the magic came in the third movement Largo where there were beautiful solo passages from the flute, oboe, clarinet and cello, and an overall sense of mystery was created by the orchestra as a whole. Richly rewarding, this movement alone was worth the ticket price.

Only occasional blemishes surfaced, such as disparities of tuning between the strings and woodwind in Nocturne of the Copland, poor synchronisation at the start of the concerto’s third movement, and indifferent violin section unison tone in the angular and exposed writing early in the symphony’s first movement. But these were soon forgiven in the general feeling of excellence. Perhaps they were not even the players’ fault, being caused by the less-than-ideal physical conditions – cramped space for such a large ensemble and a very warm evening. While Holy Trinity Church has an acoustic that is sympathetic (but not over-resonant) and

excellent lighting, the space is somewhat limited. Some years ago the church authorities removed several ranks of pews at the front of the nave to create a performing space, though two fewer than some users had recommended. Perhaps this is something that it could reconsider.

This was a very successful concert, and Folkestone Symphony should be congratulated. Clearly there is a growing and supportive audience for what it offers.