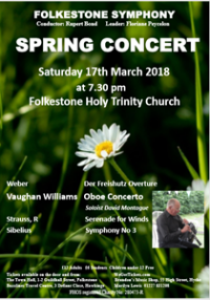 The reputation of Folkestone Symphony is clearly established well in the hearts of music lovers as many braved atrocious weather to attend their concert at Holy Trinity Church, Folkestone on Saturday March 17th. It was a tremendous programme, full of contrast and with some pieces rarely heard in the concert hall, but a joy to listen to in the capable hands of conductor Rupert Bond.

The pieces played spanned the years between the early nineteenth century and the mid twentieth and the orchestra truly explored the nature of Romantic music over that time. The concert began with the high mark of that movement in Germany – Der Freischutz overture by Weber. Its soaring tunes, dramatic tension and overtones of legend and magic need to be played with passion and commitment and these players certainly gave us that as the intricate melodies soared to a climax. Weber, although young, was a masterful orchestrator and the choice of this piece to open gave every section a chance to shine – from the daring opening horn chorale to the virtuoso playing of the strings under some lovely woodwind playing which set the mood of dark forest and remarkable events.

It was in fact the woodwind who took centre stage for the second piece – another youthful and romantic composition this time by Richard Strauss – his Serenade for 13 Wind Instruments. Although he was only 17 when he wrote it, his talent for understanding the solo characteristics of each instrument was clear and these excellent players relished the chance to entrance the audience with their skills. It is a piece which rarely uses the whole ensemble so we got to hear fascinating combinations of duets, trios, quartets, melding different timbres together with commendable nuances of tone and dynamics. The oboe took an expressive leading role, the four horns played a rare and wonderful part at the core of a chamber piece and the use of double bass for double bassoon provided a silky texture to the deeper hues of this charming performance.

To ensure that the strings had similar opportunities, the programme imaginatively continued with Vaughan Williams’ Concerto for Oboe and Strings. The soloist, David Montague, proved to be an expert at coaxing the most lovely range of tone and dynamic contrast from his instrument which set a real challenge for the accompanying players, already coping with this composer’s notoriously demanding writing for strings. To their great credit, led by Flo Peycelon with flair and great musicality, this was a consummate performance. The oboe was so evocative of English countryside since time immemorial and that plangent folk sound which Vaughan Williams made his own came across powerfully from a well bowed and well drilled accompaniment.

The finale to the concert was another of this orchestra’s explorations of the works of Sibelius. His Symphony No 3 in C major is not the most familiar, nor the easiest of his works and yet I found this a splendidly fulfilling end to the evening. By this work, Sibelius had pushed his vast lines of melody and the Romantic vision of his homeland to the back of his mind, but the pulsing investigative working of the piece by the Folkestone Symphony both captured the haunting resonances of the composer’s more famous works and gave us a fascinating insight into how musical fragments can be put together to create an exhilarating whole. The drumming pizzicato of the ‘cello and basses was particularly impressive as was the sheer power of the woodwind chorale playing.

The first movement is a complex one and yet, undaunted, these players exuded a sense of making it fun to play – it always had rhythmic pulse and it was driven skilfully to its gentle resolution by the conductor, who noted with reason in his programme introduction that this music “speaks to the listener’s own soul”. The middle movement – a nocturne- had all the nuances of music for the night, drifting in and out of the stormy evening with alternating gentleness and mystery. The final movement, which picks up elements of the first two, seems at first to be going nowhere, but when the excellent brass section intervened with what becomes final climax, this music took on an energy and power which left the audience stimulated and satisfied.