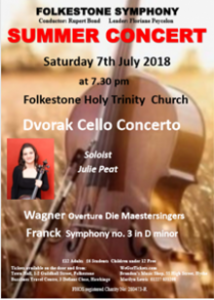 Folkestone Symphony (the public face of the Folkestone and Hythe Orchestral Society) has, with good reason, built up a large and enthusiastic following for its concerts. As expected, the large audience in Holy Trinity Church on Saturday 7 July were rewarded with a standard of performance that enabled the music to be enjoyed without thought that this orchestra is made up from players who are mostly not professional musicians. Folkestone Symphony helps plug a major gap in the availability of live orchestral music in the town.

The concert took the traditional form of overture, concerto and, after the interval, symphony. For this reviewer the Symphony in D by César Franck was the highlight. A relative rarity in the concert hall these days, its unusual three-movement structure contains a wealth of memorable tunes, magical moments and drama. The orchestra played with great style and were alert to the conductor’s flexible approach to pace and phrasing. The start of the first movement was highly atmospheric, and the end of the second was so good that the audience held its breath. The woodwind in particular were admirable, as they were throughout the concert, with consistently good tuning and unanimity in chording. The big tunes of the third movement came across well and the triumphal ending made a substantial and thrilling impact. To quibble, the ghostly string writing of the second movement, which forms a background to tunes elsewhere in the orchestra and is mostly marked pianissimo or quieter, was too loud and grabbed unwonted attention. And why use trumpets when the score specifies cornets (two, in addition to two trumpets), which make a rather different and more authentic sound.

The concerto (Dvorak’s for Cello in B minor) was securely played by Julie Peat, with sweetness and passion, and alertly accompanied by Rupert Bond and the orchestra. Cello concertos are always hard to balance, and at times the soloist had to work hard to project through the denser orchestral textures. However, the second movement contained passages that were truly beautiful, especially towards the end, with excellent wind tuning, balance and phrasing. The audience gave an appropriate warm response.

Though still enjoyable, Wagner’s Meistersingers overture at the start of the concert was a tough test of players who had not fully warmed up. In particular, the exposed unison violin passage at about bar 28 was untidy and the balance between the multiple themes at Figure E less than ideal. Here Wagner gives a repetition of the opening theme to the double basses and tuba, and clearly intends it to be heard because all the other parts are marked to be played quieter; a few more bass players would have helped.

Overall this was a very enjoyable concert. Over the past few years Folkestone Symphony has made huge advances and is now delivering concerts of which they and the town can be proud.